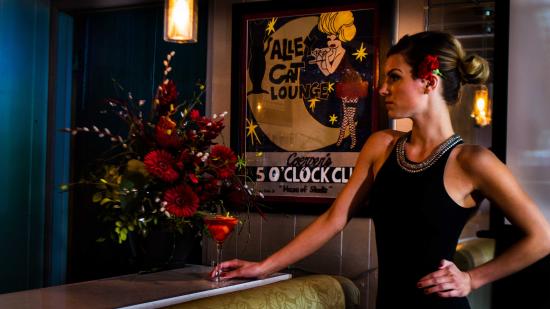 The Five O’Clock Steakhouse, one of Milwaukee’s most favorite restaurants and consistently voted on “top” or “best of” lists, is known for its tender and savory steaks.  The Alley Cat Lounge, located on the second floor, is a town favorite, hosting live music every Friday evening.  The eatery has been around since the 1940s, and has something of a mysterious history. Recently, a long-forgotten mural was discovered behind the mirrors of the bar area.  Managing partner Stelio Kalkounos attributed this mural to part of the restaurants extensive history as a club.  Stelio wanted to keep and restore the mural to its former glory, as it has been part of the restaurant for many years.

Stelio is happy to report that the restoration of the mural, painted by H.J. Scharwick, has been completed.  Little is known about the painter who lived from 1914 to 1981. There are only a few other paintings that have been found that he had done.  The mural at the supper club features a nude woman reaching up and grasping the neck of a large, winged, black horse, both of which are rising from a delicately painted cloud.  The bold mural is contributed to the restaurant’s club past.  Come see the historic mural and have a fantastic dinner at the restaurant.  www.thefiveoclocksteakhouse.com