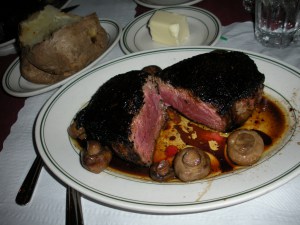 Five O’Clock Steakhouse, along with Wicked Urban Grill, support many community organizations. However, some fundraisers hold a special place in the hearts of all those involved, including the Wounded Warrior Projects. In the summer of 2014, the restaurants hosted an event that benefited the Wounded Warrior Project along with the local Drew Neichreiner Cerebral Palsy fund. Stelio Kalkounos of Five O’Clock Steakhouse was very excited about co-hosting a vintage car show that provided free music from Streetcar Railroad and The Carpetbaggers to all of those who attended. The event raised money for both great causes while providing fun for all who attended. The Five O’clock Steakhouse has been rated one of the best steak houses in America by multiple sources such as travel channel’s “Steak Paradise 3,” Travel and Leisure, and Culinary TV Host/ Author Rachel Ray.